May be ex-library. Buy with confidence, excellent customer service! Log-in or create an account first! But of course it was thanks to the same psychic awareness that allowed her to perceive the fluctuating currents of the immaterium, and read the future that was written there for those who had the eyes to see it. With the hiss of compressed gas, the bulkhead door to the reclusium irised open, rousing the dreamer from her hypnotic reverie. A figure stood-silhouetted in the aperture, tall and robed, surrounded by a nimbus of muted backlight.

With a whirring of neck servos the astropath looked up. There was very little of her that had not been augmented or adapted in some way. The astropath's life-support cradle was suspended from a gargoyle-mouthed buttress that projected out into the centre of the reclusium, wreathed with power cables and feed-pipes. It hung at the centre of a complex pattern inscribed on the Mhorovite onyx floor of the chamber, the detailing of the warding sigils and inscriptions of holy lore picked out in platinum, silver and gold. Awake, the warp-seer's numerous psycho- and mechanical-induced tics recommenced as well.

The elongated fingertips of her hands tapped a rapid staccato rhythm on the polished marble plinth in front of her, her eyes spasmodically glancing at the deck of crystal cards every few seconds. Between glances, the astropath looked up at her visitor. The man was tall and stick thin. His body was swathed by a heavy cowled robe, like those favoured by many servants of the Emperor, its hem elaborately embroidered with the machine-code catechisms of the Omnissiah's priesthood.

She could see little of his face beneath the shadowing hood of the cowl, other than the myopic blinking of a red ocular implant. The figure strode across the black stone floor of the chamber towards the seer's consultation plinth, a metallic tapping punctuating the sackcloth scrape of his heavy robes dragging across the floor.

The astropath knew why the magos was here: there was only one reason why anyone of his standing ever came to visit her prison. Her gaze lingered for a split second longer on the tarot deck in front of her. There were no words of greeting exchanged between the two. As far as her visitor was concerned, she was merely a tool to be used for a specific job, no different to a lascutter or hydraulic wrench.

http://vipauto93.ru/profiles/spiare/come-trovare-iphone-6-rubato.php There was no need for conversation. That said, when the priest utilised a tool such as electro-forceps he made a supplication to its machine spirit before commencing. She did not even warrant that. She knew her place. She raised the deck in her adapted hands and deftly shuffled the cards with the speed of an automated credit counter, the beautifully worked, wafer-thin slivers of crystal flying between her articulated digits and arranging themselves into an esoteric order potent with eldritch potentialities and possibilities, known only to capricious whims of fickle fate.

It could take centuries to master the Emperor's tarot, to learn every combination of cards, every subtle nuance of meaning, read every play of warp-light on the psychoplastic-impressed images. Time few practitioners were ever graced with. One scribe-artist would labour his entire lifetime lovingly hand-crafting a single card. Laid out in their entirety, the cards formed an allegorical image of the entire Imperium - a realm that spanned a million worlds and untold billions of souls - its heroes and its enemies. In the Emperor's Tarot there were cards representing the champions of the mankind including the noble warrior, who was prepared to make the ultimate sacrifice in his service of the Imperium, the superhuman Space Marine brother of the mighty Adeptus Astartes; the truth-seeking inquisitor; the rabble-rousing preacher of the Imperial creed; the shadowy, death-dealing assassin; the inspiring Chaplain of the Astartes Chapters, the unequivocal judge and the warp-seeing astropath, of course.

Conversely, there were also cards bearing terrible, soul-searing images depicting the myriad enemies that threatened the human race. These were the cards of the Arcana Discordia. There was the vile, faithless traitor; the sorcerous alien warlock; the disgusting mutant, and the blasphemous-tongued heretic. There was the hulking tusk-mawed form of the beast ascendant, the leering horror that was the daemon and the notoriously guileful, ambiguous character of the Harlequin - the wild card of the Emperor's tarot. But of course the most potent card in the tarot was that of the immortal Emperor himself, bound within the ancient, unfathomable technology of the Golden Throne of Terra.

A skilful astropath could discern the shape of things to come from a reading of the tarot. The many paths that fate might tread in executing its grand designs could be seen in the pattern of the cards since the pictures on their faces were psychically attuned to the constant flux of that otherworldly half-reality that existed beyond the physical universe. The warp.

The immaterium. The empyrean.

The ether. The Sea of Souls. The Realm of Chaos. It was man's greatest hope and yet also his gravest peril. Humanity's link to that realm of raw emotion, the spiritual counter-universe, enabled mankind to draw upon the infinite power that lay there waiting to be exploited. And yet his very presence in that place attracted the interest of predators born of mankind's own imperfect psyche.

The seer revealed the top card. Upon it was inscribed a robed acolyte, carrying a hammer and a book. As both the astropath and her visitor watched, the image seemed to flex and ripple until it settled again, only now the image of the supplicant's augmetically enhanced face appeared on that of the High Priest. This card would act as his talisman signifier; the card representing the one for whom the reading was being made.

The astropath took up the rest of the deck again and proceeded to carefully lay out seven cards face down on the plinth in front of her, two inside a circle of five; the classic basic reading pattern. The seer inhaled deeply, breathing in the heady perfume of the incense, feeling it free her mind of the restrictions of the physical failings of her body. Her breathing became slow and regular as she freed her spirit to commune with the warp.

Psykers - the name commonly given to those with psychic talents - had appeared in the human race long before the founding of the Imperium. Psychic ability was the human race's curse as much as its gift. Without this mutation the Imperium could not survive. Without psykers, messages could not be sent tens of thousands of light years to all corners of the Emperor's galaxy-spanning realm. Ships could not traverse the empyrean and make journeys between worlds that would otherwise take a thousand lifetimes.

The servants of the sinister Officio Inquisitorum could not defend the Imperium's loyal servants from those who would pervert the Emperor's Will, and see His works undone and all creation overturned. And the Navigator Houses of the Navis Nobilite would not have their position of privilege brought them via their stranglehold of power on the Administratum of Terra. And yet the great majority of psykers were reviled, shunned by all right-thinking people.

For it was through the psyker that the Fell Powers could work their corruption in the physical universe. Thanks to the psyker, daemonic creatures, born of base unchecked human emotions, could break through into the material realm. It was they who could bring the Imperium to the very edge of destruction and then take it over into the abyss. The astropath looked down at the cards with her astral vision. Even the intricate illuminations decorating the backs of the crystal slivers appeared more vibrant and alive with a spectrum of colours that could only exist within the warp, lit by the eerie light of non-existent stars.

Through her psychic sight she could see other darting images superimposed on the mundane world that existed within the reclusium. Creatures that looked like disc-shaped sharks swam through the ether, circling her visitor, who was totally unaware of their presence. In contrast to the uselessness of her crippled body, the warp-seer's soul-fire burned so brightly that it would normally obliterate the faint flickers of those nearby. But the cloaked figure's aura shone brightly too. Fate obviously had a purpose in mind for him as well.

The warp predators circled both her and the magos, drawn to the lustrous brilliance of their souls, frondlike feelers waving in the unknowable currents of the immaterium, snapping at their glowing outlines with horribly fanged jaws. The astropath returned her attention to the cards placed with machine precision on the marble plinth top in front of her. 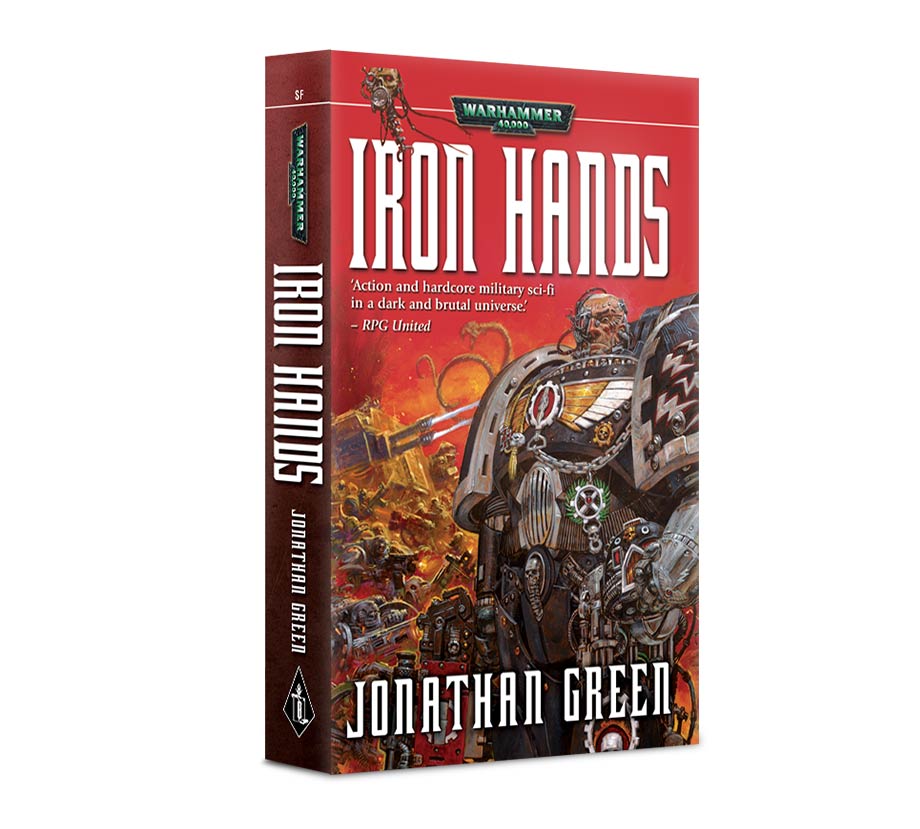 I invoke thee, beloved Emperor. Infuse these cards that I might attain true insight of things hidden, to thy greater glory and the salvation of humanity.

The snarling face of a fire and brimstone preaching missionary looked back at her from the card, but the image was upside down. As the astropath focused on the tarot card the picture on its liquid crystal surface swam but seemed unable to fix itself in one form. The Preacher's face continued to change from one arrangement of features to another in an unending cycle. A blasphemer who preaches a message of death and destruction, a creed contrary to the will of the Emperor. The warp-seer turned over the second card.

She gasped involuntarily, the fan-pump that fed her lungs whining at double speed to compensate. The supplicant watched in silence. The third card was turned.